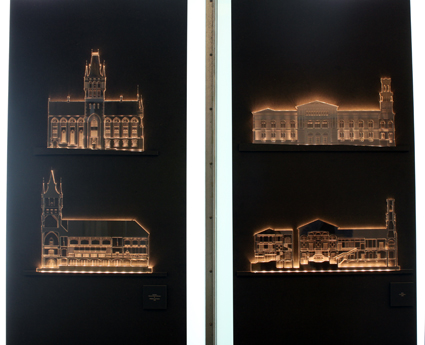 In the autumn semester 2014, two master students have been affiliated to the Printed and Built research project, designing and curating an exhibition on the Norwegian Parliament building.

From 1835 to 1860, around 20 projects were made for a Norwegian Parliament building, evoking a vivid public debate regarding the building’s siting, style, and spaces. The debate peaked with the architectural competition of 1856–57, when the winning proposal of Heinrich Ernst Schirmer and Wilhelm von Hanno was discarded for a late-comer, the Beaux-Arts-educated Swedish architect Emil Victor Langlet. Langlet in his turn was nearly ousted by the Danish professor Christian Hansen, before securing a small majority in the Parliamentary vote of 1860. The public press took an active role in this argument, which must be characterized as one of Norway’s most important public debates on architecture.

By means of meticulous archival studies and architectural analysis, AHO master students Iselin Bogen and Ole Knagenhjelm Lysne have reconstructed six of the projects for a Norwegian Parliament building. The projects are displayed as lasercut plexiglass relief models, showing the main façade and section of each project. With their extraordinary precision and level of detail, the models give a vivid impression of 19th century historicism. In addition to the model display, Bogen and Lysne present all existing projects for a Norwegian Parliament building in a book. The drawings belong to several different archives, public and private, and this is the first time this valuable material is presented in its entirety.