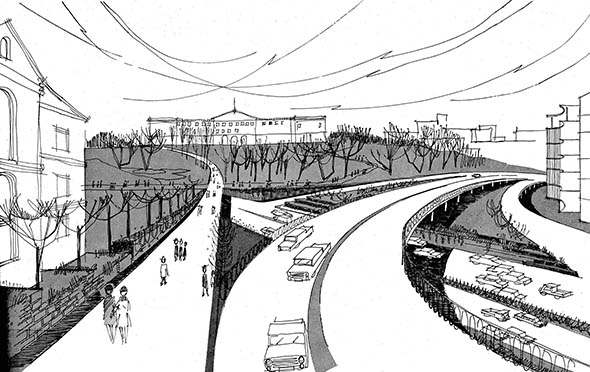 Even Smith Wergeland defended the thesis titled  From Utopia to Reality – the Motorway as a Work of Art on 22 March 2013. It was approved by the following adjudication committee: Professor David Pinder, Roskilde University, professor Siri Skjold Lexau, University of Bergen, and associate professor Jonny Aspen, the Oslo School of Architecture and Design.

Wergeland’s doctoral thesis deals with the visualization of urban roads and mobility in architecture and urbanism in the postwar period. Through an exploration of empirical material ranging from municipal master plans to artistic motorway representations, it shows how seemingly remote disciplines are connected through a complicated exchange of images across time, space and cultural contexts. Images of the mobile city influenced the international postwar architecture culture, exemplified by Team 10’s radical views on urban mobility, which charged the urban motorway with intrinsic aesthetic values. This movement and its visual strategies made a huge impact on the planning of Oslo in the postwar period, a time when car culture became deeply entangled in the urban discourse. The thesis challenges the established scholarly perception of postwar Oslo as a ‘technocratic’ city governed by sheer pragmatism as it shows how utopian motorway proposals introduced a plethora of aesthetic, visual and architectural impulses that came to expression in the 1950s and 1960s. These influences can be detected in the contemporary Oslo cityscape, as traces of an urban aesthetic that made the leap from utopia to reality in far more sophisticated ways than previously acknowledged.

Even Smith Wergeland is a postdoctoral research fellow at the Oslo and Akershus University College and an associate professor in urban and regional planning at the Norwegian University of Life Sciences. He was a doctoral candidate at the Oslo School of Architecture and Design between 2009 and 2012, and a member of the multidisciplinary research project Routes, Roads and Landscapes during the same period.