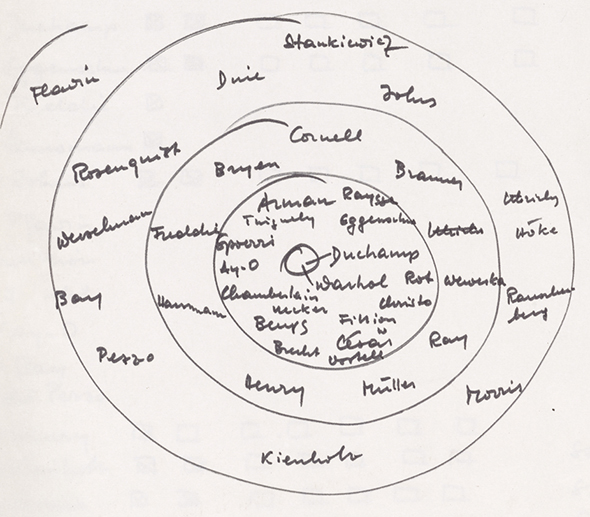 Exhibitions have increasingly become the subject of historical inquiry, as part of a gradual assembling of a history of exhibitions and of the work of curatorial practitioners. Yet, in this historical re-examination, the spatial dimension of the exhibition as a whole is rarely foregrounded. The focus of this thesis is, therefore, the curated exhibition as a spatial construct. The thesis makes a contribution to Exhibition Studies, which can be seen as an emerging field, situated at the intersection of Art History, Architecture and Design, Museum Studies, and Curatorial Studies.

The thesis introduces a set of terms to capture the spatiality of curated exhibitions, which include: the curatorial programme of the gallery space, the notion of a walk-through the exhibition, the curatorial argument created through the placement of works in space, the sequence the works are placed in, and the interval between the works and between the works and the visitor. The terms are applied to three case study exhibitions at the Henie Onstad Kunstsenter, outside Oslo, in the period 1970-1972: Ny kunst i tusen år (A thousand years of new art), which included loans of cultural artefacts and ethnographic objects, shown together with the Kunstsenter’s own collection of modern works of art; Vår verden av ting – Objekter (Our world of things – Objects), a collaboration with independent curator Harald Szeemann and the Kunsthalle Nürnberg on the theme of artists’ use of everyday ‘things’ in the 20th century; and Norsk Middelalderkunst (Norwegian Medieval Art), for which architect Sverre Fehn was commissioned to create the exhibition design for a display of loaned medieval objects at the Kunstsenter. Each exhibition has its own chapter in the thesis, and each chapter also situates the exhibitions at Henie Onstad Kunstsenter in a broader archipelago of exhibitions and debates within the field of Exhibition Studies.

Natalie Hope O’Donnell is the curator for the project ‘Munchmuseet on the Move (2016–2019)’ at the Munch Museum in Oslo. She studied Modern History and Politics at the University of Oxford (1999–2002); Law and Legal Practice at BPP Law School, London (2002–2004); Curating Contemporary Art the Royal College of Art, London (2006–2008); History of Art, Philosophy and Political Science at the University of Oslo (1998–2008, part-time); and Cultural Studies at the London Consortium (2009–2011). She completed her monographic PhD thesis at the Oslo Centre for Critical Architectural Studies (OCCAS) at the Oslo School of Architecture and Design (2012–2015).