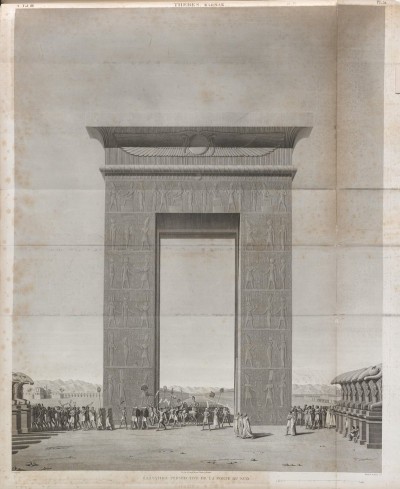 When Napoleon entered Egypt in force in 1798, he brought an army of draughtsmen alongside his soldiers. Tasked with depicting the country from its smallest insects to the greatest monuments, drawing was intrinsic to the French imperial ambition and would continue to be so as the European continent grew obsessed with the vestiges of a past that seemed to resonate with the ambitions of the present. To this end, drawings functioned as the medium that could bring to light that which was buried, and restore that which was ruined, all the while providing illustrations to a new chapter of the history of art and architecture. In workshops in Paris, scores of engravers and etchers translated these drawings into prints, themselves monumental, fashioning an Egyptian antiquity that was ultimately as totemic of a provisional imperial future as a description of a lost past. This talk reflects on some uses of drawing in the nineteenth-century Europe, when images created passages between the Nile and the Seine.

Eirik Bøhn is an art historian. He is the editor and curator, alongside Mari Lending and Tim Anstey, of Images of Egypt, a book and exhibition exploring how representations of ancient Egypt across different media invented and fragmented Egypt for modern, Western sensibilities. Currently part of the research project Printing the Past: Architecture, Print Culture, and Uses of the Past in Modern Europe (PriArc), he writes about Egyptian antiquity as it was conjured through European printmaking in the nineteenth century.