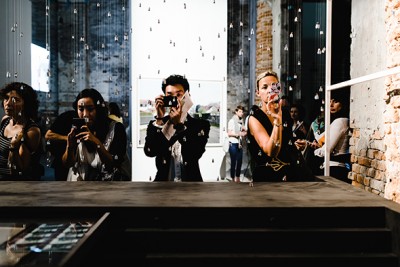 Installation par of the Monditalia exhibition at the 14th International Architecture Exhibition of la Biennale di Venezia,“a scan across the Italian territory from South to North, and more extensively from Africa to the Alps and Europe.”

“Effimero: Or the Postmodern Italian Condition” tells the story of the series of ephemeral works of architecture constructed in Italy between 1977 and 1989. During the late 1970s and 1980s, as a response to the socio-political turmoil known as the anni di piombo (Years of Lead), a number of ‘events’ took place around ephemeral structures. Theatre, performing arts and other forms of entertainment acted as catalysts of a new collective imagination which, coupled with the rediscovery of the architectural language of the baroque, gave rise to a new sense of the spectacle, culminating in the Pink Floyd’s 1989 Venice concert, for which an entire artificial island was created off St Mark’s.  “Effimero: or the Postmodern Italian Condition” is both an archive of original drawings, photos and press cuttings of the structures that sustained these spectacles, and a sensitive and interpretative installation recalling an important moment in the Italian cultural scene.

“Effimero: Or the Postmodern Italian Condition” was curated by Léa-Catherine Szacka. For this project, Léa-Catherine has worked with U67 – an architecture practice based in Oslo and founded by Italians Fabio Gigone and Angela Gigliotti, the Canadian graphic designer and photographer Valérie Paquette and the French architect Julien Sage-Thomas.