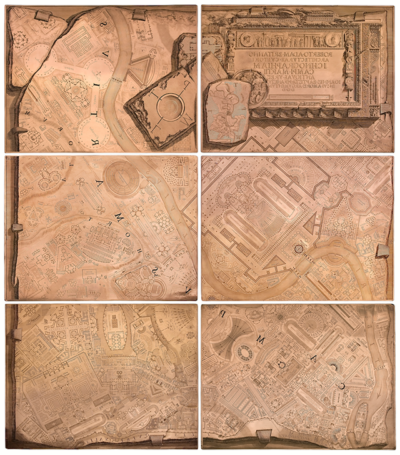 Piranesi and the Modern explores the significance for posterity of the eighteenth-century printmaker and architect Giovanni Battista Piranesi (1720-1778). While Piranesi’s art was overlooked and unappreciated for much of the nineteenth century, it was rediscovered in the following century. From the start of the twentieth century, his architectural visions contributed to defining the Modern in various forms of art. His irrational spatial experiments, labyrinthine interiors, and crumbling ruins spoke to people who were attempting to orient themselves in a new and fragmented world – in an era characterized by social, political and aesthetic upheavals.

The exhibition inaugurates the new museum´s rooms for contemporary exhibitions and brings together loans from 18 institutions in 10 different countries, including MAXXI (Rome), Centre Pompidou (Paris), Yale University (New Haven) and OMA (Rotterdam). It counts extraordinary loans, such as Piranesi´s copper plates for the great Campo Marzio plan (1761) as well as drawings and models never previously exhibited. In the National Museum – Architecture, a satellite of the exhibition puts on display Piranesi´s etchings of imaginary prisons within vaults (designed by Christian Heinrich Grosch) that seem like physical manifestations of the prints.

Piranesi and the Modern shows how Piranesi´s compositions laid the foundations for techniques and forms of expression that were far distant from his works on paper. High-contrast photography, cinematic montage, abstract painting and postmodernist architecture were all inspired by Piranesi’s art and also, one could argue, dependent on it. The repeated attempts of the Modern era to achieve the new, the limitless and the impossible led to the discovery that Piranesi was already positioned at the very outer limits. The Modern era not only discovered Piranesi; it was through Piranesi that the Modern discovered itself.

Piranesi and the Modern is a collaboration between OCCAS/AHO and the National Museum of Art, Architecture and Design. It is curated by Victor Plahte Tschudi (AHO) and Wenche Volle (The National Museum).