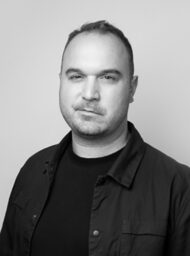 Nick Walkley is a PhD fellow researching nostalgic ornament in the digital age. His study, supervised by Professor Mari Lending, will take the portal of Urnes Stave Church as starting point for the investigation of decorative architectural components and their projection into a digital future. This research will form part of the OCCAS project Provenance Projected: Architecture Past and Future in the Era of Circularity.

Walkley graduated from Manchester School of Architecture with BA(Hons) and BArch. His 2008 dissertation “Towards Digital Ornament” was subsequently nominated by the school for the RIBA Presidents Medals. Following work in UK architectural practice, he served as a professional musician in The Queen’s Guard, London, and simultaneously completed an MA at the Royal Academy of Music. A deep-rooted fascination for shared North Sea culture led to a move to Norway in 2016, a return to the architecture profession and a renewed interest in medieval architecture. His professional interests are in conservation and restoration, and in digital archiving, design, and fabrication methods.