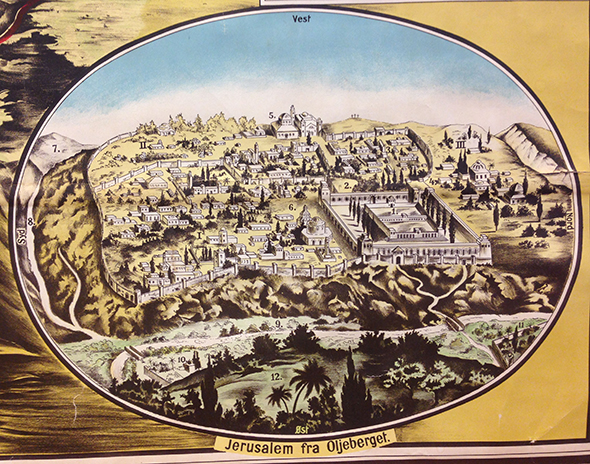 The quest for Jerusalem, earthly and celestial, has had formative impact throughout the entire history of the Western world. As the site of the Jewish temple and the scene of Christ’s death and resurrection, Jerusalem became the axis mundi, the locus of divine presence on earth and a signpost to the goal of history. The project aims to trace the historical roots and multiple applications of the idea of Jerusalem and its sites in Europe and beyond, investigating the recurring negotiations between transcendent worldviews and mundane politics, between real and imagined Jerusalems in texts, images and buildings.

Tracing the Jerusalem Code is financed by the Norwegian Research Council FRIPRO-program and runs for three years (2015-18). It is a collaboration between the Norwegian School of Theology, University of Oslo, and AHO and includes the key-researchers Kristin B. Aavitsland (project manager), Arne Bugge Amundsen, Otfried Czaika, Victor Plahte Tschudi, and Ragnhild Johnsrud Zorgati.