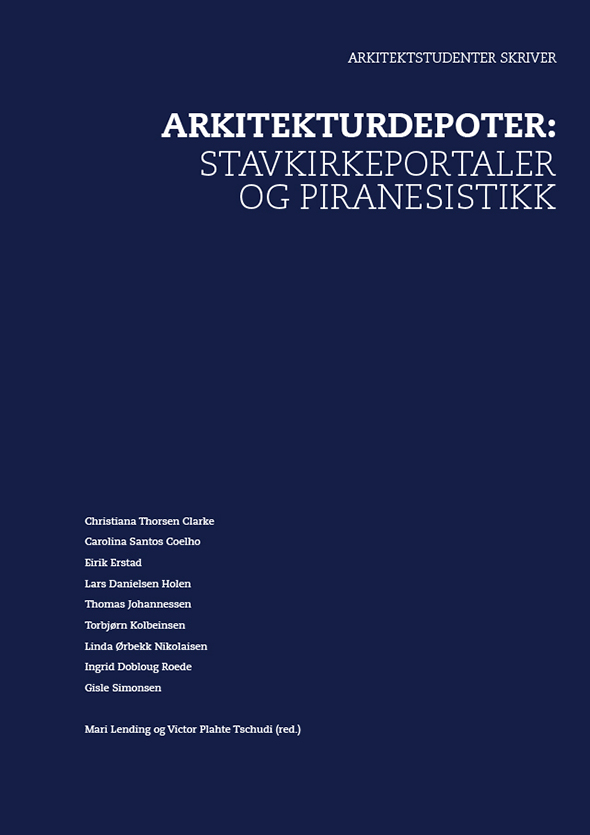 It might seem long between G. B. Piranesi’s engravings of antique ruins from the mid 18th century and Norwegian stave church portals in flux through 19th century European and American collections of plaster casts. Yet, both engravings and plaster casts were once mass media: The copper plate and the mould were part of technological regimes facilitating duplication and dissemination – of images, objects and ideas. Ancient structures mediated through prints and medieval monuments casted in plaster form part of exhibitions, museums, depositories, storage spaces, compendiums and catalogues in ways that redefine the original and challenge the idea of an object’s unique and universal value. Their afterlife as reproduced commodities presents a history characterized by paradoxes and destabilisation.

The students’ essays presented in Arkitekturdepoter: Stavkirkeportaler og Piranesistikk re-establish iconic architecture in contexts that are as surprising as they are amusing. The essays show how the reconstitution of mediated building fragments has accelerated (and continues to do so) at an increasingly dizzying pace with the originals themselves put on the sideline and the copies subjected to the political, aesthetical, technological and commercial developments taking place in the last 150 years or so.

This is book # 4 in the OCCAS publication series ”Arkitekturstudenter skriver” [Arcitecture students write]. The student essays spring from the elective courses ”Architectural Fantasies: Piranesi &Co” and ”The Art of Collecting Architecture”, both pertaining to the research project Place and Displacement: Exhibiting Architecture, and led respectively by professors Victor Plahte Tschudi and Mari Lending.