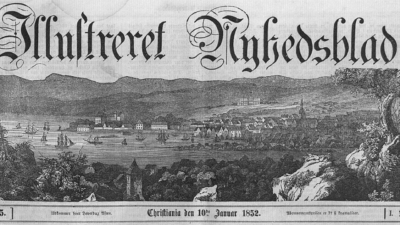 Iver Tangen Stensrud defended his PhD dissertation “The magazine and the city – Architecture, urban life and the illustrated press in nineteenth-century Christiania” on 20 June 2018. The committee consisted of professor Narve Fulsaas from the University of Tromsø, professor Barbara Penner from University College London, and associate professor Jonny Aspen from AHO. Stensrud’s research was part of the Printed & Built project and was supervised by Mari Hvattum.

Focussing on two illustrated periodicals, Skilling-Magazin(1835-1891) and Illustreret Nyhedsblad(1851-1866), the dissertation explored the relationship between the city and the magazine from two perspectives, investigating the magazine in the city and the city in the magazine. The nineteenth-century illustrated press was produced, distributed and read in the city, its editors, writers, engravers and printers being part of a developing urban culture. At the same time, its texts and images helped constitute the urban environment and engender an urban culture.

The thesis located the printers, publishers, editors and image makers in the changing urban environment of Christiania. It discussed printing and publishing practices and enquire where, how and by whom these periodicals were produced, distributed and read. It then turned to the representations of the city in the magazine, looking at the modern city as it was represented in texts and images published in the illustrated press. Through case studies of the coverage of specific events and sites in the city, the thesis discussed the city as a spectacle, urban renewal and the changing nature of the political public.