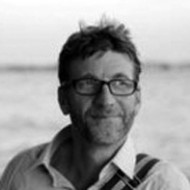 Tim Ainsworth Anstey studied architecture at the University of Bath in England, graduating with a PhD in architectural history in 2000. After some years in architectural pratice he moved to Sweden, where he became Head of Research at KTH School of Architecture, Stockholm. Since 2013 he has directed AHO’s PhD Programme in combination with teaching and research activities within OCCAS/the Institute of Form, Theory and History.

His publications include Architecture and Authorship (Black Dog, 2007) and Images of Egypt (Pax Forlag, 2018), with Mari Lending and Eirik Bøhn. He was designer and co-curator for the international exhibition Images of Egypt at the Museum of Cultural History, Oslo, 2019. He is currently completing a book of essays, Things that Move,with MIT Press, and working on the project Re-inscribing the Warburg Institute, which studies the role of architecture for the thought of Aby Warburg and his followers. With Mari Lending he is curator and designer for the relating architectural exhibition Warburg Models.